Kavieng, the capital of New Ireland Province is located just 2º South of the equator in Papua New Guinea.

It is a dynamic, exciting young nation, where centuries old tradition intermeshes with everyday 21st century life. Kavieng is the quintessential South Pacific town; an outpost in a tropical paradise and the perfect place to dive PNG, relax on a beach or discover an amazing tropical world.

The scenery is stunning and contrasting -low lying coral islands surrounded by golden beaches and pretty fringing reefs and mountainous islands which drop sharply into the sea. Kavieng has a commanding position overlooking Nusa harbour and the islands. A limestone bluff in the centre of town was turned into bunkers during World WarII. Japanese gun emplacements and various other remnants of the war can still be explored. 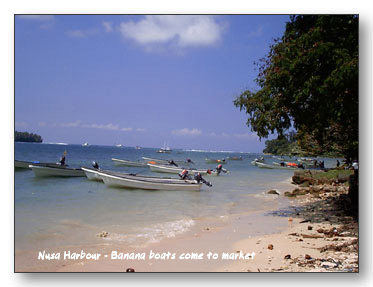 New Ireland is the shape of a giant rib situated between 2º and 5º South Latitude and 150º and 153º East Longitude, is 360km long but not even 10km wide in places. This island has an unusual geology; down its centre runs an extremely rugged range of mountains, which attain an elevation of six thousand feet.

New Ireland has 22 languages, many of them related – although you’ll be able to get by fine with English in Kavieng. Many traditions of New Ireland groups are similar—matrilineal descent, big man leadership, weapons & tools. However there are differences in house & canoe designs, burial sites & marriage ceremonies. Malagan, Tumbuan & Shark Calling are among New Irelands many traditions. 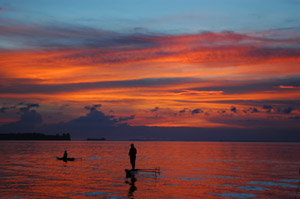 New Ireland’s traditional culture is related to the Malagan concept. Malagan is a stylistically distinctive art tradition. Malagan carvings reflect the Malagan themes embodied upon the relationships central to the social organization to kinship ties linking social groups in the villages.

There are also different cultural identities in various parts of New Ireland. In the Namatanai region much of the peoples culture is very much centered around the sacred “Tumbuan” society a well guarded secret on which nothing much has been written as the villagers jealously guarded their secrets from researchers.