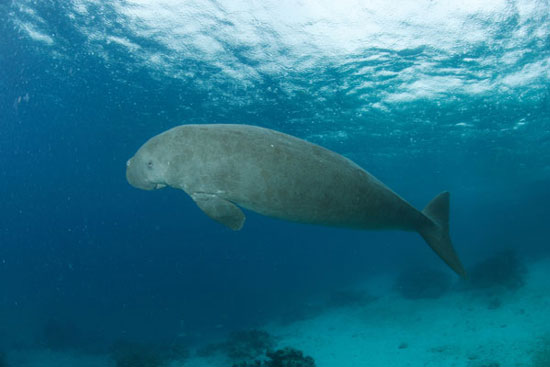 International underwater photographer Franco Banfi dived with us to compile an underwater image library for the PNG Tourism Promotion Authority. During a surface interval, Scuba Ventures staff member Apo spotted a Dugong close to the boat. Franco has swum with numerous marine mammals and here tells us about his experience:

“I approached it slowly and it looked as if it was going to swim away.” Franco suspected his large camera with wide angle dome port and strobe lights was quite imposing. “I then turned away and started swimming towards the boat. Looking back I saw that it was following me. At this point I knew that it was curious so I took the opportunity to get close. The strobes where a little distracting for him, but he was happy to stay with me.”

Franco managed to snorkel with the Dugong for almost 40min! We often spot them from the boat when we are heading out for dives but they duck down pretty quickly as we pass. Underwater encounters with timid dugongs are very rare, so it was a special treat to spend so much time with one of these placid creatures.

“It is not so much the photos but the experience that was so amazing,” Franco told us. 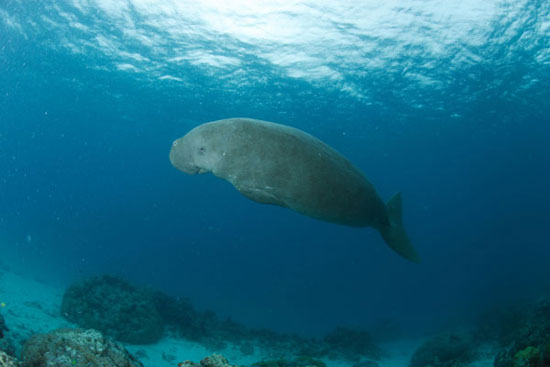 The Dugong or Sea Cow is a marine mammal occasionally spotted around the waters of PNG. Like whales, Dugongs evolved from terrestrial mammals which returned to the sea, possibly from the group that gave rise to elephants. Dugongs are an endangered species world wide. The waters around Kavieng feature submarine meadows of sea grasses where dugongs graze contentedly like giant sluggish underwater lawn mowers. Dugongs are the only herbivorous animals alive now that are completely marine. Once dugongs lived in herds of up to a hundred, but centuries of hunting has made them quite rare.

Dugongs feed mainly on the more delicate and nutritious sea grasses, which they search out with sensory bristles on the upper lip. The lip itself is a versatile tool that digs out clumps of grass, roots and all, and carriers them to the mouth. Their teeth are surprisingly large for docile vegetarians. Fully grow, a dugong may be 3 metres long, and weigh over 300kg. Dugongs may live up to 75 years and mate for life.

Franco Banfi resides in Lugano in southern Switzerland, and has been a professional photographer for over 15 years. His most notable major publications are two books on diving – Papua New Guinea and Dive Guide to Papua New Guinea – which he produced in 1996.

In addition to these books, Banfi’s articles with accompanying photographs on PNG have been published in numerous dive magazines around the world. The exceptional quality of his work and his reputation as a professional has helped place PNG as a premier dive destination. He remains one of the most influential underwater photojournalists today..  www.banfi.ch 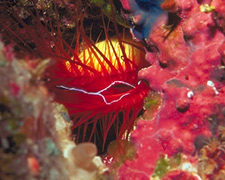 Late January 2007, Scuba Ventures owner Cara spotted two “Flashing Clams” under a ledge at Namnamin. “Out of the corner of my eye I spotted a few blue streaks. Thinking it was cleaner shrimps at work, I went closer to investigate. To my surprise I found these spectacular clams. Lucky there was just enough light available to create the blue streaking; without any light I wouldn’t have noticed them. I couldn’t tell you how many times I have swam under this ledge and have never noticed them before.”

A friend, Simon Foale, introduced us to these fascinating little clams in the Solomon Islands. The clam needs to be illuminated to create this effect; the Brighter the light the more spectacular this lightning. A torch shone directly on the clam creates the most brilliant white sheet lightning effect.

TITLE: On the Mechanism of Streak like Flash on the Mantle of Ctenoides ales (Bivalvia: Limidae)

Abstract: Generation of the streak like flash in the inner fold of the mantle in Ctenoides ales was investigated by video camera recording, and stereo, light, fluorescence and electron microscopy. The stereo microscopy revealed the presence of a pale white band along the entire width of the marginal edge of the shell side surface of the inner fold. Since the flashing could not be seen in the dark, it was not due to the luminescence but the reflection of light… the electron dense vesicles packed in the cytoplasm function to reflect light strongly.

The video observation showed that the mantle made a movement to roll the white band towards the shell side and then, within a second, the rolling movement was released. The phase of the movement was different by the portions of the mantle, and the mantle edge made a wave like motion. When the pale white band was hidden by the roll, the reflection of light disappeared. When the rolling was released, the reflection of light reappeared. Since the “roll and release movement” repeat quickly, it looks as though a streak like flash run along the mantle margin.